“Central to UK’s success this season is our offensive & defensive lines. Central to you having the best lawn this season is getting your equipment from Central Equipment on Red Mile Road!” he posted on Twitter.

In July of this year, the NCAA began allowing college student-athletes to be compensated for the use of their name, image and likeness (“NIL”) for the first time. Previously, student-athletes were prohibited from accepting such compensation in order to retain their eligibility to participate in college athletics.

A senior, McCall is a nose tackle on the UK football team and carries the nickname of “Bully.” He was named preseason third-team All-SEC, according to the UK Football website.

In a Central Equipment tweet, the company noted: “Check out Kentucky Football star @MccallMarquan on Saturdays, wrecking other SEC football team’s offenses, and cutting grass on the #1 brand of mower, @Exmarkmowers from @CentralEquip in his off days. Bully is big and fast, just like the full lineup of Exmark Lazers.”

Central Equipment has been a long-time supporter of University of Kentucky athletics and its football program, says Jason Huber, Central’s general manager.

“When the NIL announcement was made,” says Huber, “I felt it was the perfect opportunity to not only help out some of these college students that make up the team that we love to support on the field, but also have them help us get the Central Equipment brand, and the brands we represent, to their large base of social-media followers.”

“In the future, we’re looking at allocating more of our marketing budget to NIL advertising because here in Kentucky, we don’t have any professional sports teams, so college athletics is king – in Lexington, all eyes are always on University of Kentucky sports,” he continues. 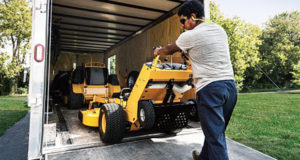